Live Free or Die Hard: Worth it! 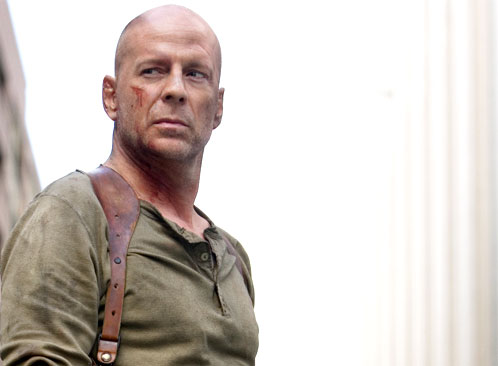 Bruce still looks good at 52, better than most men I know that age. But does it mean he can throw himself from a speeding vehicle without breaking his collar bone? Apparently!

"Live Free or Die Hard" was worth the $18.50 we sprang for two tickets. Loved it! My kids said when we got home late last night, "Must have been better than 'Knocked Up'. You're happy!"

Indeed. What makes this popcorn summer flick so much fun is that you feel utterly free to laugh at the outrageous special effects and action sequences whose only real goal is to surprise the viewer (since credibility is out the window). Success! You need to see this film, if only to discover how a car takes out a helicopter. :)

Unlike Mission Impossible 23 (or at least it felt like the 23rd time we had to sit through Tom Cruise's self-indulgent smile), the dialog in this film is snappy, even when campy. Willis gives just the right understated "I'm the only one willing to be a hero-thing" while hidden in his eye-twinkle is an awareness of how absurd it is to be in yet another action flick at his age. I appreciated that layer.

The real star of the picture for me, though, was Justin Long. First smitten with Mr. Long when he became the human Mac-icon, I found myself even more enthralled with Long now, as the twenty-something anti-hero sidekick (Matt Farrell) to Willis. He looks scared - really scared - most of the movie. He has the right wide-eyed growing realization look as he sees "old man" McClane's perspective vindicated at every turn. The writers exploited the generation gap which at times felt obvious and other times clever. I liked it nonetheless.

The evil chick in the flick is 95 lb. Maggie Q whose Kung Fu antics against hefty McClane are as entertaining as they are incredible. Timothy Olyphant is terrific as the smoldering, under-appreciated, government-slandered evil lord of the technological underworld.

If you're looking for fun action where good guys are more creative than the bad guys, where the action sequences surprise you and make you laugh with their improbability as much as their skill in pyrotechnics, this movie is perfect for the Fourth of July weekend.
Posted by Unknown at 1:20 PM

Dirk and I went last night too. I agree with everything you have said about it. I loved it from the first shot to the last and didn't even mind paying full price.

This looked really good in the trailer we saw for, oh, I can't remember now, it was either the 3rd Spiderman movie or Ocean's Eleven).

Looking foward to seeing it!

I linked here and quoted you but I am not sure that I can get Ann to the movies for this one :)

I have never seen any of the previous Die Hard movies but I've heard a lot of good things about this one. I'm still thinking that Ratatouille and Sicko are ahead of LFODH on my list, but your recommendation has significantly raised my interest.